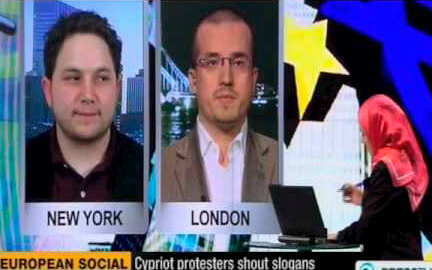 Simon: “What we see is a lack of understanding of what the cause and the root causes are of what we are suffering of today. It’s focusing on symptoms. What we have is a nation, and entire Europe, which is suffering from too little money and too much debt. (…) The reason we have that is basically because we have a deep dependence on the banking sector as essentially the money supply for all the European countries.”

Simon: “Speculation comes from a banking system that is systematically flawed. The challenge is that banks determine where the money gets spent rather than governments. If you leave this decision to the banks, their favorite assets will always be property, which pushes up property prices beyond control, which is an increase in the rich-poor divide. Secondly, 40% of that [the money they create] goes into financial speculation which has no value to society, all it does is bankers making a commission when trading products which each other; money is making money and adding no value. You need a redistribution to the productive side of the economy, and the productive side is the businesses that create jobs. Being the root cause, I say speculation is still just a symptom of a system where we allow the banks where money goes. ”

Presentatrice: “Banking reform, is that of what you speak of?”

Simon: “All we are doing now is kicking the can down the road, solving debt with more debt. (…) We need to make some structural changes [to the banking sector]. Otherwise it is going to end in every European country like we see in Cyprus today.”